MCCU Contributes to the Feeding Programme of the Spur Tree Seventh-day Adventist Church. After partnering with the Spur Tree SDA Church to host its 70th Anniversary Church Service, MCCU continued its partnership with a cash donation towards their Feeding Programme. Residents from Communities in and around the Spur Tree area benefit from this on-going initiative that is carried out by the church. 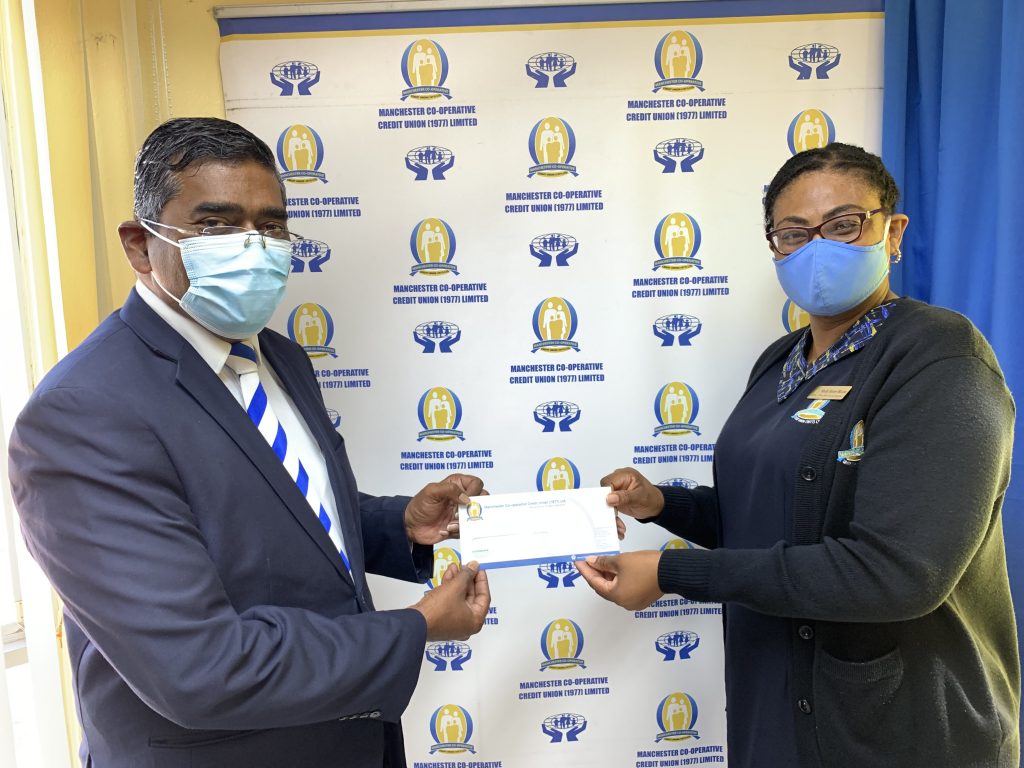 As part of the institution’s mandate to reach communities and satisfy needs, The Manchester Cooperative Credit Union donated a total of 60 tablets to drive efficiency among several groups thrusted in virtual spaces as a result of the pandemic.

The donations were successfully made on a phased basis over a two-month period with the first group- Caribbean Christian Centre for the Deaf, receiving a total of 20 tablets in March 2021.

In the final stage of the distribution on May 19,2021 the Garlogie Primary & Junior High School received a total of 10 tablets.

With the unavailability of fully functioning devices, even as the demand grows, particularly for children who are now engaged in online learning, the distributions were highly welcomed and are said to have made a significant difference.

Through the donations, all beneficiaries were given the opportunity to maximize their output and continue properly their academic and professional pursuits.

Back to School Extravaganza 2019 A Huge Success

In an effort to creatively package and share the diversified offerings of the Credit Union’s Back to School Loan in 2019, the institution hosted a grand Back to School Fair and Outside Broadcast with media giants Mello FM.

The fair hosted on August 24, 2019 and dubbed ‘MCCU Back to School Extravaganza’ was held on the greens of the Cecil Charlton Park and saw scores of parents and children turning out for the day’s activities.

The individuals present and tuned into radio station, were not only made aware of the of various offerings but had the opportunity to engage in transactions that best suited them.

Radio personality, Ron Muschette, was live on location and kept the momentum a successful staging.

Not only were the attendees able to learn more about the institutions products, but were also engaged in giveaway sessions throughout the event.

Among them included: free school medicals offered by Dr. Howell and assisted by representatives from the National College of Professional Studies, free back to school supplies to over 300 students and free rides and popcorn for the children.

Parents were assisted to open accounts to gain access the back to school loan special.

For years, the Credit Union has been hosting its Annual Soup and Soap Project, with hundreds of beneficiaries’ form across the parish.

Through the initiative, persons from several areas benefit from meals and personal care items, that are always timely and well received.

Prior to COVID-19, the Credit Union carried out its last major Soup & Soap project at the Caribbean Christian Centre for the Deaf, KnockPatrick Campus where dozens attended.

This project saw the Credit Union providing hot meals to the students and staff at the institution along with boxes of bath soaps.

Other Institutions that have benefitted in recent times include: The Manchester Infirmary, Ebenezer Home for the Mentally Challenged and the Mount Olivet Boys’ Home.

Though the pandemic has put a pause of these efforts, the MCCU is committed to resuming the initiative at the soonest possible time.

Labour for Love in Mile Gully

A host of staff members and volunteers took to the Mile Gully Community Centre on Labour Day in 2019 and got their hands dirty for a well needed beautification project.

The community centre which serves several Northwest Manchester districts was repainted and the grounds thoroughly cleaned.

During the project bathroom fixtures which were specially bought for the initiative were handed over for installation at a later date.

Not only did the building receive a much needed facelift but the joy of the residents was evidenced on their faces.

They expressed gratitude to the Credit Union for the work done, even as representatives from the institution used the opportunity to interact with the members of the community.

The faces of the children on the Pediatric Ward of the Mandeville Regional Hospital were lit with excitement and joy, following the Credit Union’s donation of toys just days before Christmas day last year.

The donation was made possible through a toy drive initiated by the institution which saw members and staff donating toys and books by placing them in designated, labeled containers at both the Mandeville and Christiana branches.

The nurses and administration of the hospital expressed gratitude for such an initiative and the dozens of children on the ward had a brighter Christmas as a result of the love and tangible gifts they received.

With Labour Day activities being significantly scaled down due the COVID 19 Pandemic, the Credit Union used the occasion to carry out a social outreach activity which targeted a specific group of members in 2020.

In this regard, the Marketing Department created fifty (50) Care Packages consisting of food items which the branches then distributed to selected members who are in their senior years.

The beneficiaries included senior citizens and those who fell in dire situations as a result of the economic downturn, compounded by the onslaught of the pandemic.

Additionally, in keeping with the institutions aim to satisfy needs, the Credit Union, as part of its 70th Anniversary Celebrations erected a number of hand washing/sanitization stations in various institutions throughout the parish.

The first set of stations was installed at the Garlogie Primary School on May 28, 2021, with other schools, state homes and public spaces set to benefit from this initiative.

The Credit Union remains committed to the fight against Covid and will ensure that it plays its part to ensure compliance to all safety and sanitation protocols.

The Credit Union has consistently supported and participated in the Annual Men Who Cook event hosted by the Lions Club of Mandeville at the popular Brooks Park venue for years.

As a result, several worthy causes undertaken by the service club has seen much success and the organisation continues to be seen as a beacon of lift building bridges of hope.

The charitable event, Men Who Cook, has given the Credit Union the opportunity to make its contribution by way of sponsorship and in return the Credit Union is able to creatively showcase its products & services to the wide cross section of individuals that attend the event.

Since its inception and since the institution’s participation, along with other brands, the service club has been able to raise millions of dollars, which have been used to fund needs of the Mandeville Regional Hospital and build a Pathology Lab that will soon be able to satisfy the needs of the central region.

As part of its 70th Anniversary Celebrations, the Credit Union has pledged to erect a number of hand washing/sanitization stations in various institutions throughout the parish. In this regard, the first set of stations was installed at the Garlogie Primary School on May 28, 2021. Other schools are down to benefit in addition to homes and public spaces.