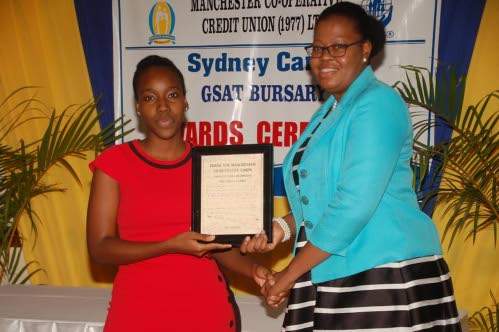 MANDEVILLE, Manchester — Abigail Senior graduated from Manchester High School this year and is now off to law school at The University of the West Indies.

Undoubtedly a number of factors led to that accomplishment, but she took time out recently to express particular gratitude to Manchester Co-operative Credit Union for being there with her along the journey.

Senior said that she was selected by the organisation, as it celebrated its 65th anniversary milestone in 2016, to receive the one-off Ivan Harris Bursary valued at $65,000, and that was added motivation to be the best that she can be.

“Not to show off or brag but the Manchester Co-operative Credit Union has left such an indelible mark on my life, and I must share it with all of you. In 2016 I benefited from the special Ivan Harris (Bursary). The following year, I worked hard and was rewarded with fifth place for CAPE (Caribbean Advanced Proficiency Examination) law in the Caribbean. This year I received five grade ones in my CAPE subjects. Manchester Co-op, I vowed to make you proud — because had it not been for your great input in my life, I probably would not be standing here today speaking of these successes,” she said.

Senior was speaking at the Co-op’s annual scholarship and bursary awards ceremony recently, where she was one of 27 recipients who benefited from the over $1 million in back-to-school support this year.

“Year after year you make it a priority to give bursaries and scholarships not just to one person, but to many individuals, without demanding anything in return,” said Senior.

She added: “Thank you for reviewing our applications so carefully and for making the time from your very busy schedules to interview us, which, might I add, has helped us to learn how to conduct and present ourselves in an interview. Out of so many children, you chose us and we promise as recipients to make this productive, caring, enriching, life-changing and compassionate institution very proud of us. We will strive to produce excellent results at all times.”

General Manager of the credit union, Michelle Ambersley, in an address to the gathering, said that human beings cannot exist in isolation, underscoring the importance of why her organisation gives back.

“These young people did not come about their achievements by themselves. They were helped and motivated by parents, teachers, family members, friends, neighbours and many, many others,” she said.

Ambersley encouraged the students not to let “detours” get them down as they aim to achieve their goals, and to stand on principles such as showing respect to others, knowledge-sharing, volunteerism, being team players in all aspects of life, and understanding that they are guided by God’s presence.

Acknowledging that she is not much older than the recipients, reigning Miss Manchester Festival Queen Crystal Scale used the opportunity to pass on some words of wisdom.